National Women and Girls HIV/AIDS Awareness Day (NWGHAAD) is March 10. Learn how HIV affects women and girls in the United States and how women can protect themselves.

HIV remains a significant health issue for women and adolescent girls, with more than 280,000 women living with HIV in the United States. In 2014, an estimated 8,328 women aged 13 and older were diagnosed with HIV. The majority of these diagnoses can be attributed to heterosexual sex. 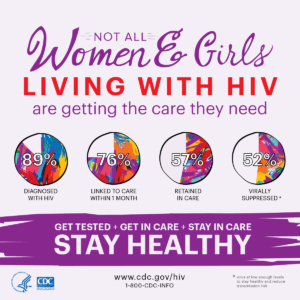 Black/African American* and Hispanic/Latina** women continue to be disproportionately affected by HIV. Among all US women in 2014,

Nevertheless, we are making progress in the fight against HIV among women. From 2005 to 2014, new HIV diagnoses declined 40% among all women and even more (42%) among black women. And for black women newly diagnosed with HIV, the percentage linked to HIV medical care increased 48% from 2012 to 2014.

The National HIV/AIDS Strategy has set goals to reduce new HIV infections even more. One goal is to make sure more people diagnosed with HIV achieve viral suppression (keeping their virus under control and at a level that greatly lowers their risk of transmitting HIV to a partner). Another focus is to increase the use of daily medicines to prevent HIV, called pre-exposure prophylaxis (PrEP). If we reach the US targets for testing and treatment and expand the use of PrEP, we could prevent an estimated 185,000 new HIV infections by 2020—a 70 percent decrease in new infections among the population as a whole. Everyone has a role to play in helping us get there.

What Can Women Do?

Start talking. Learn the facts about HIV, and share this lifesaving information with your family, friends, and community. Let’s Stop HIV Together, part of Act Against AIDS, has many resources for raising awareness about HIV and includes many video testimonials from people living with HIV.

Start Doing It – getting tested for HIV. Knowing your HIV status gives you powerful information to help keep you and your partner healthy. If you are pregnant or planning to become pregnant, get an HIV test as soon as possible.

Protect yourself and your partner. Today, more tools than ever are available to prevent HIV. You can

Get treated. If you are HIV-positive, start medical care and begin taking medicines to treat HIV, called antiretroviral therapy (ART), as soon as possible. If taken the right way every day, these medicines reduce the amount of HIV (viral load) in the blood and elsewhere in the body to very low levels, called viral suppression. They can even reduce the viral load to such a low level that it is undetectable. Being virally suppressed or having an undetectable viral load is good for an HIV-positive person’s overall health. It also greatly reduces the chance of transmitting the virus to a partner. If you are pregnant, taking HIV medicines throughout your pregnancy can greatly lower the HIV risk for your baby. Learn more about how you can live well with HIV.

If you have any questions about AIDS, HIV and your health, talk to your doctor at The Woman’s Group or make an appointment online today.

You can learn more about how to protect yourself and your partners and get information tailored to meet your needs from CDC’s new HIV Risk Reduction Tool (BETA).

* Referred to as black in this feature.

** Hispanics/Latinas can be of any race.