Risks from Eating the Placenta 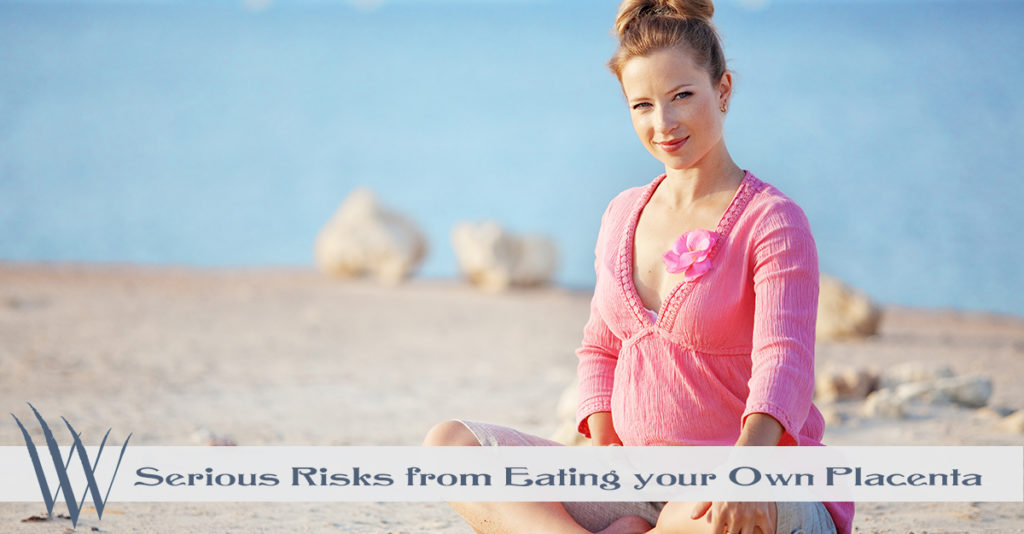 You may have heard many celebrities talking about eating their placenta after they give birth. While it may be a trendy thing to do, you need to seriously consider the risks involved.

There are lots of claims that placentophagy (a fancier term for placenta eating) improves lactation, lifts mood, provides energy and wards off postpartum depression. Placentophagy enthusiasts argue that your placenta is full of nutrients and hormones, your placenta is natural and organic (unless you eat fertilizer), and animals such as goats eat their own placentas.

A review of the scientific literature performed by Emily Hart Hayes from the University of Utah and published in the Journal of Obstetric, Gynecologic & Neonatal Nursing did not find strong scientific evidence to support the mood, energy and lactation-enhancing claims of placenta eaters. In fact, in addition to infection, she listed blood clots from estrogen hormones, and accumulated environmental toxins as possible risks of placenta eating. While studies have shown that placentas have various vitamins, iron and other nutrients, so does other food. And more studies are needed to determine if the hormones found in the placenta are really having a beneficial effect or if the reported benefits are just placebo effects.

The latest issue of the CDC’s Morbidity and Mortality Weekly Report (MMWR) tells the story of an Oregon woman who after giving birth, gave her placenta to a company, which then dehydrated her placenta and put it in capsules for her to eat. Three days after giving birth, she began eating two of the capsules twice a day. When her baby began having significant breathing problems, doctors discovered that her baby had a group B Streptococcus agalactiae (GBS) bacterial infection. Testing the mom’s placenta capsules also found GBS bacteria. Thus, apparently eating the capsules increased this type of strep bacteria in the mom, who then likely passed along the bacteria to her baby.

The CDC report does state that “no standards exist for processing placenta for consumption.” It isn’t clear whether businesses processing placentas are actually using proper precautions to prevent contaminants or infections. So if you are getting a company to prepare your placenta, beware, there may not be regulatory bodies or health officials monitoring what they are doing. At this point, the risks have shown to outweigh the benefits.

And remember to discuss any questions or health care decision with your doctor at The Woman’s Group.